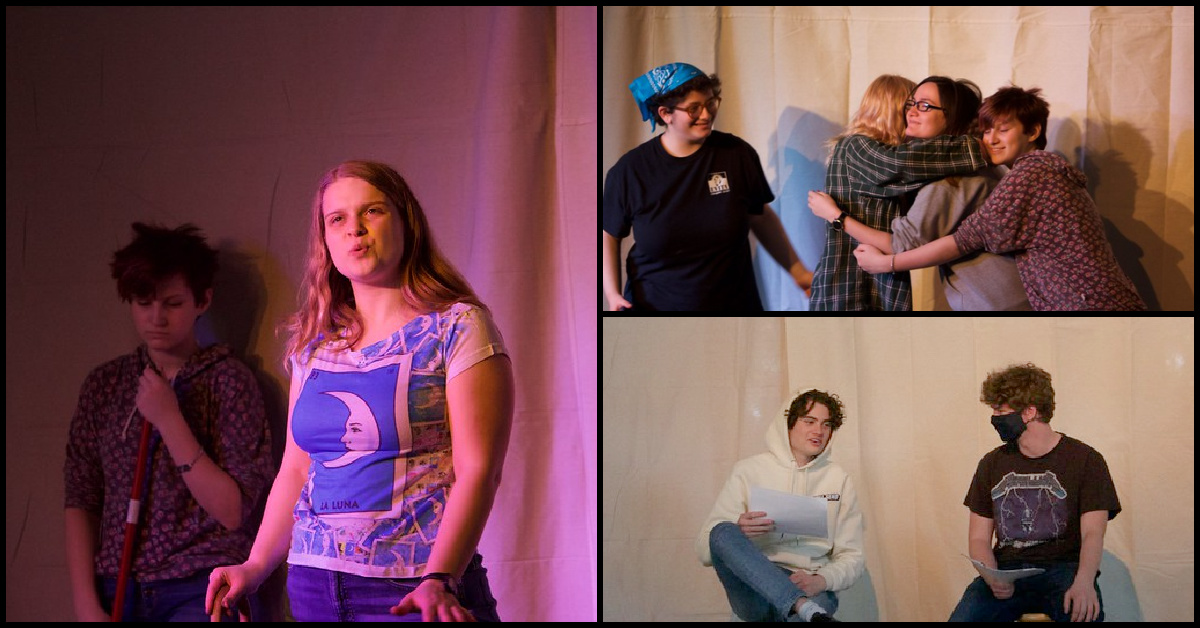 on March 23, 2021 By Molly Huddle Coffey | performance public event
In the fall, several students participated in a playwriting elective with the hope of creating an original 10-minute one-act play. When everyone returned from our winter recess, students came together to produce and perform "The Album" by Roxanne (grade 11) and "All These Weeks" by Ruby (grade 12). "The Album" is composed of a series of monologues in which three people share memories of their own version of a man who’s passed away. In "All These Weeks," four friends in a high school get caught in gossip and misunderstanding and have to decide whether they will reconcile.
Read - One-Act Plays: Watch Party April 9th 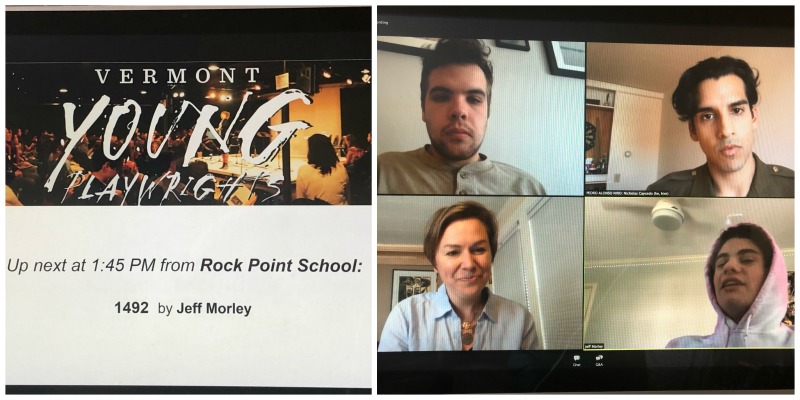 on May 14, 2020 By Molly Huddle Coffey | performance academics
Each year Rock Point School participates in the Vermont Young Playwrights' Project, in conjunction with the Vermont Young Writers and Vermont Stage Company. As part of this project, a professional playwright visits the school in the fall for a series of workshops on playwriting. Students produce original 10-minute plays during these workshops and working with our English Teacher, Abbey Baker.
Read - Vermont Young Playwrights' Festival 2020 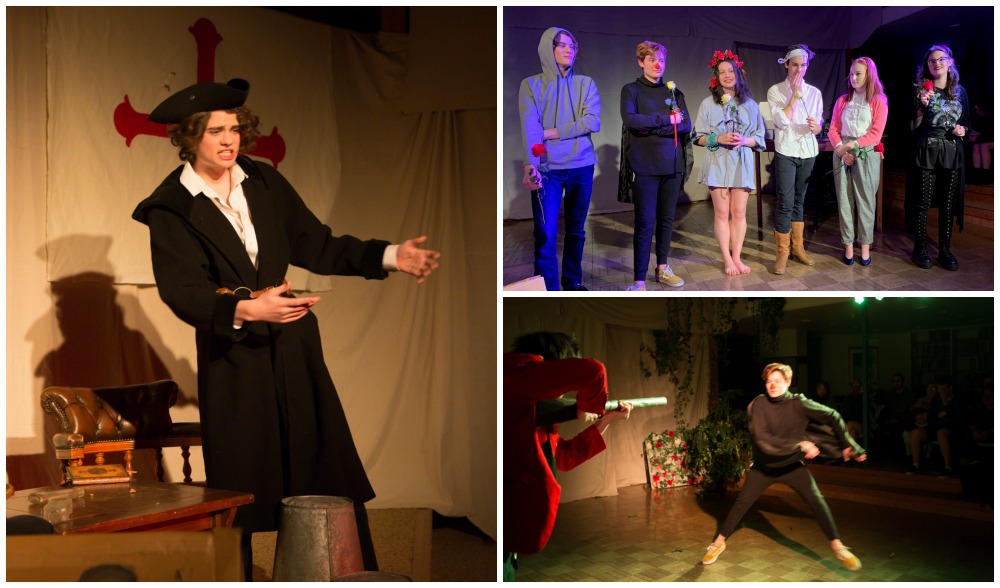 A Night of Theater!

on February 23, 2020 By Molly Huddle Coffey | performance
We are so incredibly proud of our students for all the hard work and creativity that went into the school plays this year. The performance on February 22nd showcased two student written plays, a Shakespearean monologue, and a one-act written by Christopher Durang. Students lead every part of the production from costumes to sets to lights and more. Our two student writers, Jeff and Amaris, also directed their plays, helping bring their visions to life on stage.
Read - A Night of Theater! 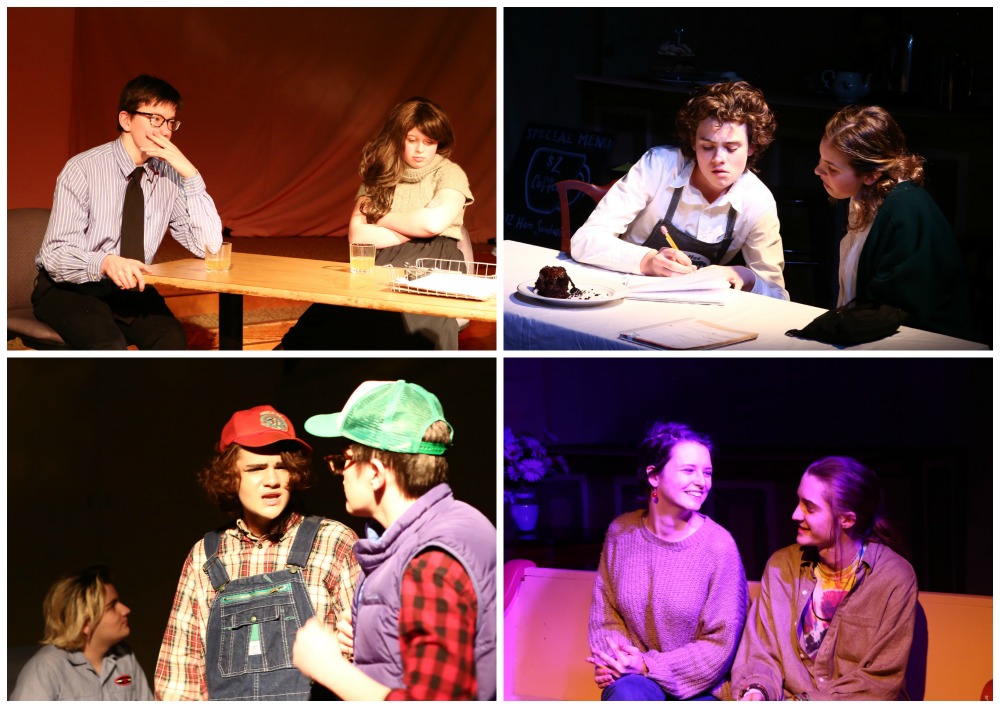 on January 31, 2020 By Molly Huddle Coffey | performance public event
After two playwriting workshops with local playwright Mary Beth McNulty, two students continued to edit and polish their plays for performance. We are thrilled to announce our One-Act play performance will take place on February 20th at 6:30 pm in our school library.
Read - One-Act Plays 2020 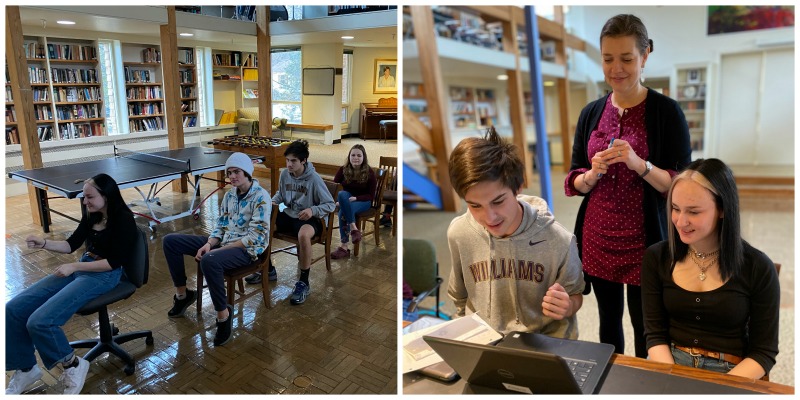 on December 10, 2019 By Molly Huddle Coffey | News Feed performance
Working with the Vermont Young Playwrights' Project, Rock Point students have begun their journey toward writing and producing annual school plays. Students had the chance to work with local playwright Mary Beth McNulty for two full-day workshops this winter. In November they played acting games, learned the techniques of playwriting, and brainstormed ideas based on prompts from Mary Beth. Students left the workshop with the beginnings of their ten-minute plays in the works, and then worked with our English teacher, Abbey Baker, to make progress.
Read - Playwriting Workshops 2019

on November 28, 2019 By Molly Huddle Coffey | News Feed Open & Inclusive performance
Each year, we gather before everyone heads off for November vacation to celebrate, express gratitude, and enjoy a feast. The Thanksgiving service is designed by students with help from staff members. This year, students read poems they selected, shared traditions, and thanksgivings. One student brought in Christmas crackers, his own family tradition, which meant we ended the service with everyone wearing paper crowns!
Read - Thanksgiving Celebration 2019 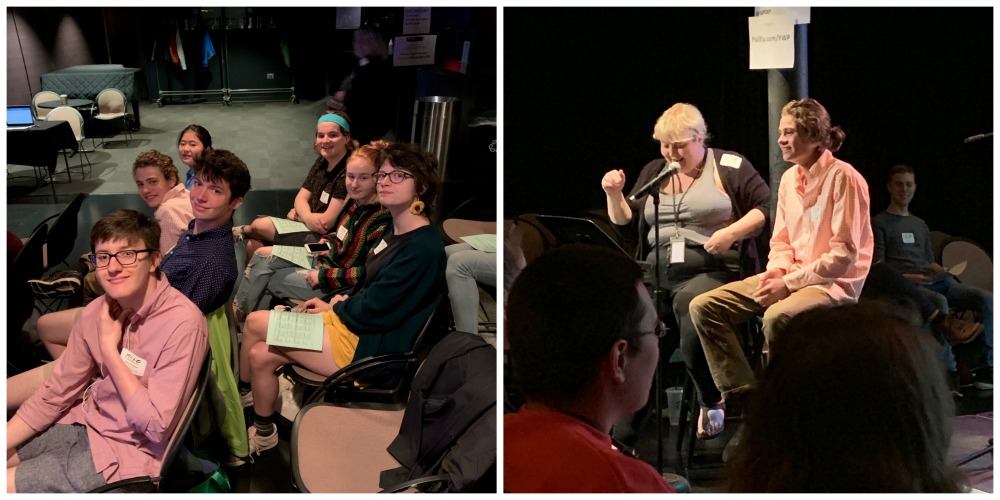 on May 8, 2019 By Molly Huddle Coffey | performance
On May 3rd a group of Rock Point School students headed to the Flynn Center for the Performing Arts for a day of theater workshops and performances! Our students have participated in the Vermont Young Playwrights' Project for almost twenty years and we were honored to be part of the festival again this spring. In the fall, students began working on writing original ten-minute plays inspired by workshops with a professional playwright. They continued to edit their plays before submitting them to the festival for selection.
Read - Vermont Young Playwrights' Festival 2019

on February 25, 2019 By Molly Huddle Coffey | performance
On February 20th and 21st Rock Point School students performed the plays they have been working on for the past few months. The process began with playwriting workshops run by a professional playwright with the Vermont Young Playwright's Project. Four students, Yukiko (10th grade), Val (10th grande), Jeff (10th grade), and Jesse (12th grade), continued to edit and develop their plays for production.
Read - We Love Drama: One-Act Plays 2019 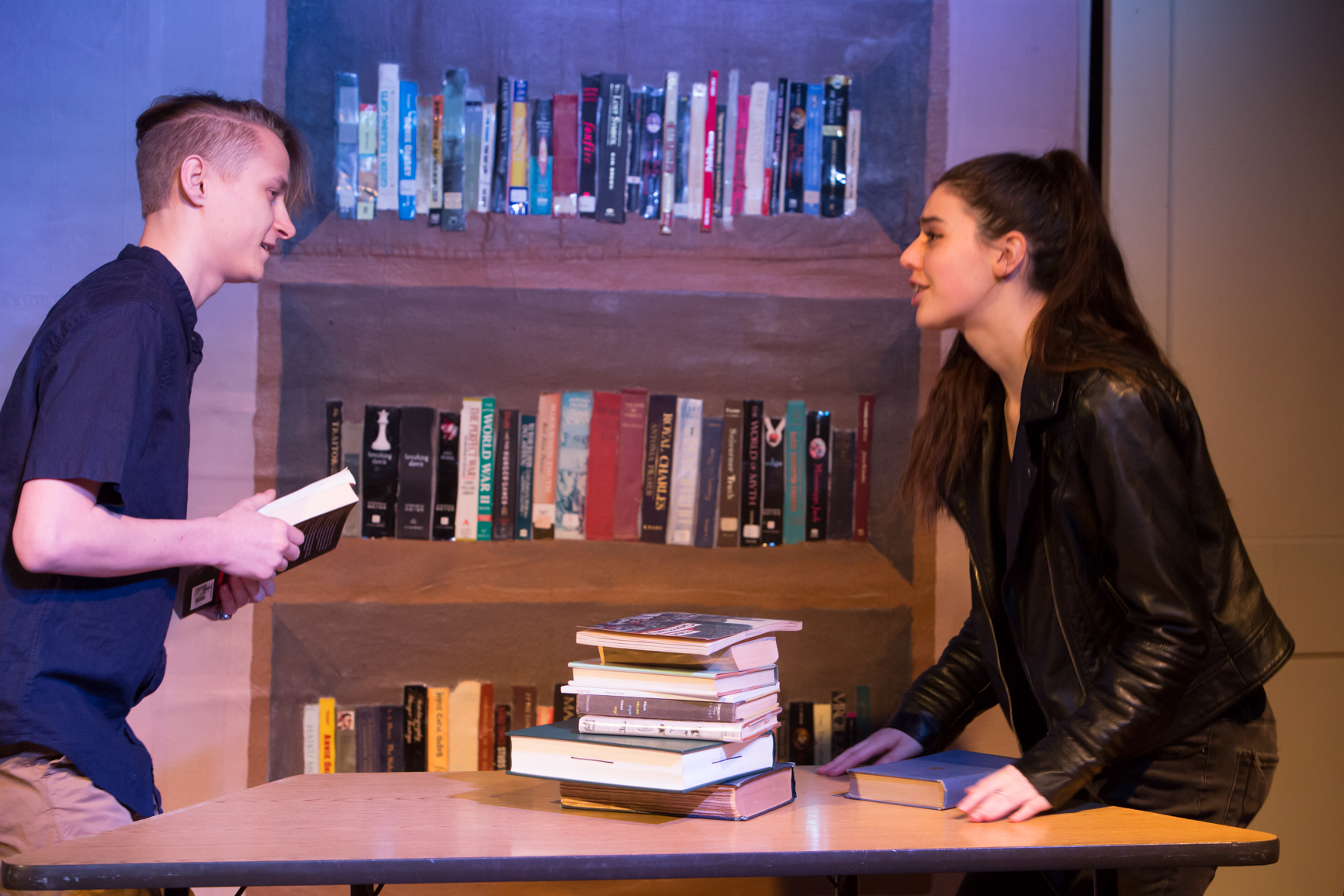 on January 22, 2019 By Molly Huddle Coffey | performance
Each year, Rock Point School students participate in the Vermont Young Playwrights’ Project, working with professional playwrights, directors, and actors to learn about the craft of playwriting. Students write original 10-minute plays to submit to the Vermont Young Playwrights’ Festival in the spring, along with other students from schools around the state. Our students also produce the plays they have written for performance: acting, directing, building sets, making costumes, and running lights. This year, the students will perform four of these original One-Act Plays! When: February 20th and 21st from 6:30 - 7:30 p.m. Where: The Rock Point School Library.
Read - School Plays on February 20th and 21st 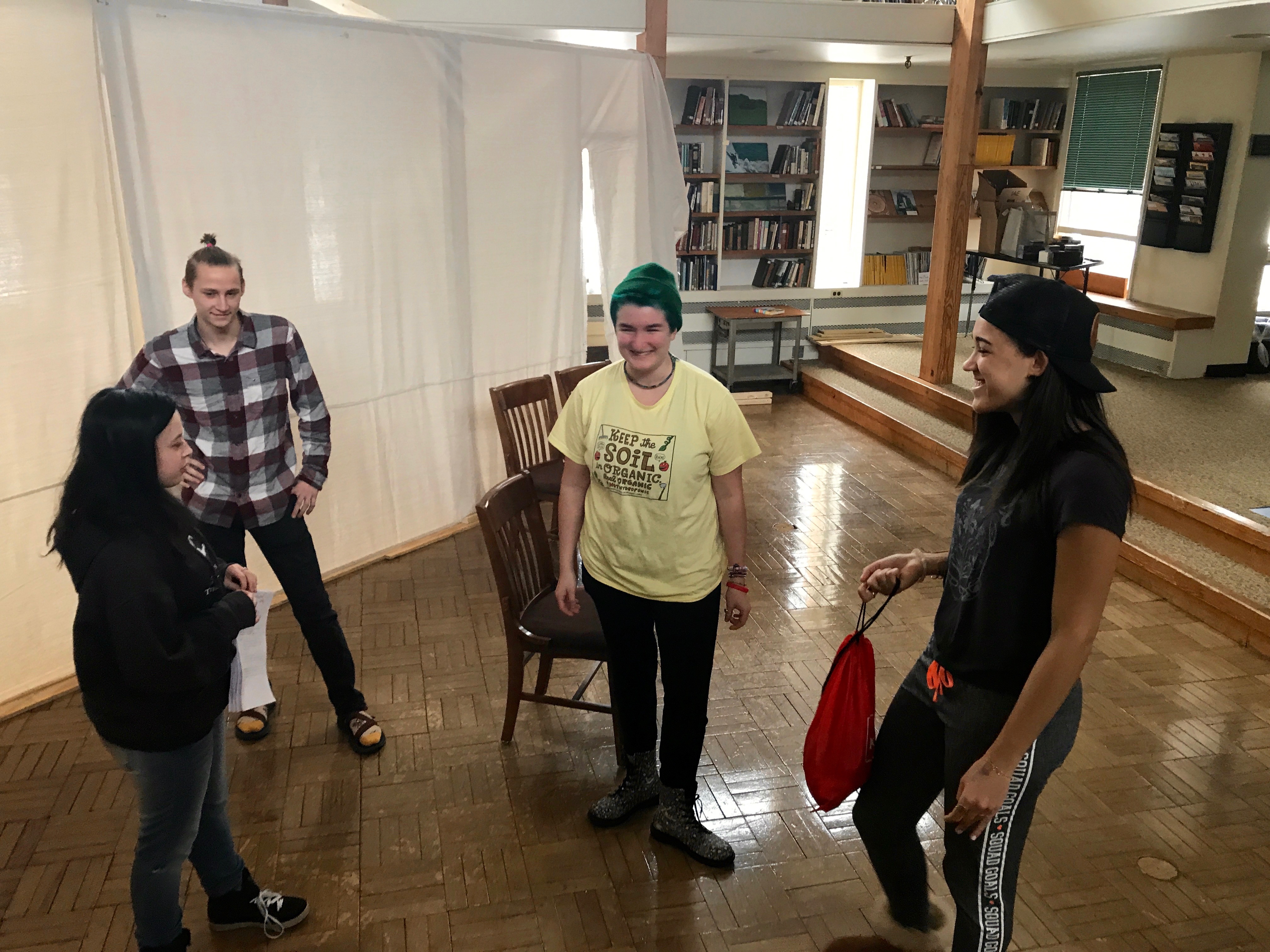 on February 8, 2018 By Molly Huddle Coffey | high school performance
Our students are hard at work getting ready for our drama performance on February 22 at 6 p.m. Earlier this winter, students began writing plays in workshops with the Vermont Young Playwrights' Project. Some students continued editing and developing their plays so that they could be performed this month.   Each student at Rock Point is involved in the production in some way, either as a writer, director, performer, set builder, costume designer, or crew member. Some enthusiastic students are taking part in multiple aspects of the production! The one-act plays range from the fantastical to the funny to the serious, and we can't wait to see the finished products.
Read - Drama, drama, drama: School Play Feb. 22
All posts Next