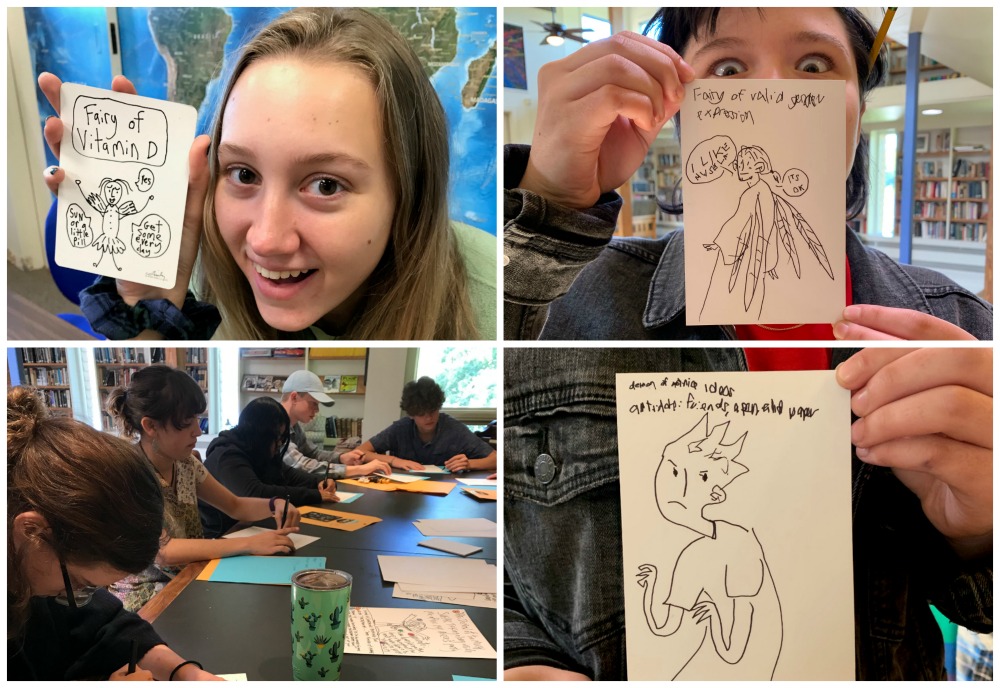 on September 18, 2019 By Abbey Baker | News Feed Motivation Open & Inclusive resilience
On Tuesday, September 17, local artist Emily Anderson brought her “Fairies & Demons Workshop” to Rock Point School. All of our students took part in this drawing workshop, which encouraged them to draw their ‘demons’, or challenges they face, as well as their ‘fairies’, or positive energies that they want to call toward them. In addition to giving students a platform to discuss what’s hard in their lives and what helps them through, they got to practice Emily’s signature drawing style, which involved drawing with their non-dominant hand. The technique allowed them to let go of the pressure to make their work perfect, and simply see what comes out when given a channel.
Read - Fairies and Demons: Creative Workshop 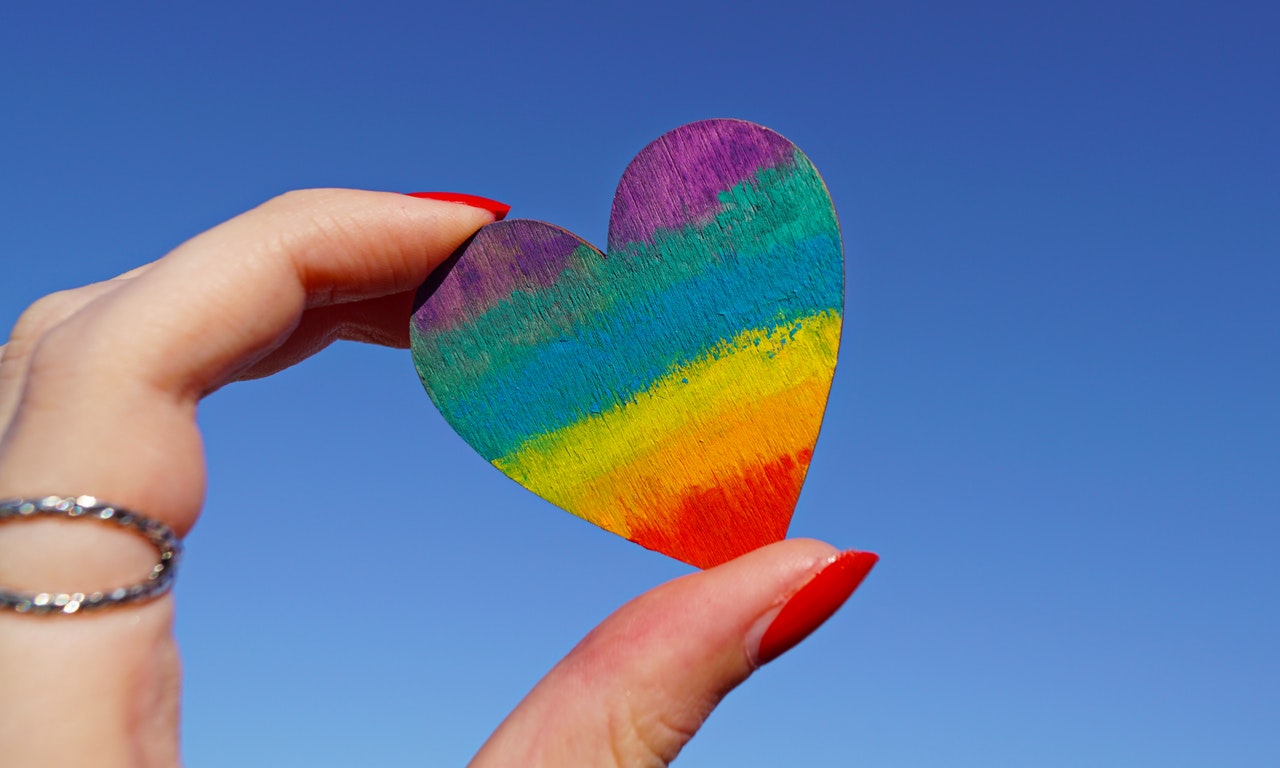 on September 13, 2019 By Molly Huddle Coffey | News Feed Open & Inclusive public event
What: Interactive Workshop When: October 17th 6:15 p.m. - 8:15 p.m. Where: Rock Point School Library Join Rock Point School for an interactive workshop designed to help families and community members increase their fluency with LGBTQ+ inclusive concepts, terminology, and practices. The workshop will be hosted by Mara Iverson, the Director of Education at Outright Vermont. Participants will learn and practice approaches for making home and community environments LGBTQ+ affirming; and will identify specific opportunities for and challenges to inclusivity. We hope those who attend will leave with broader knowledge of LGBTQ+ youth topics, methods for recognizing gaps in inclusivity, and ideas for how to apply affirming practices to fill those gaps.
Read - Creating LGBTQ+ Inclusive Community Environments 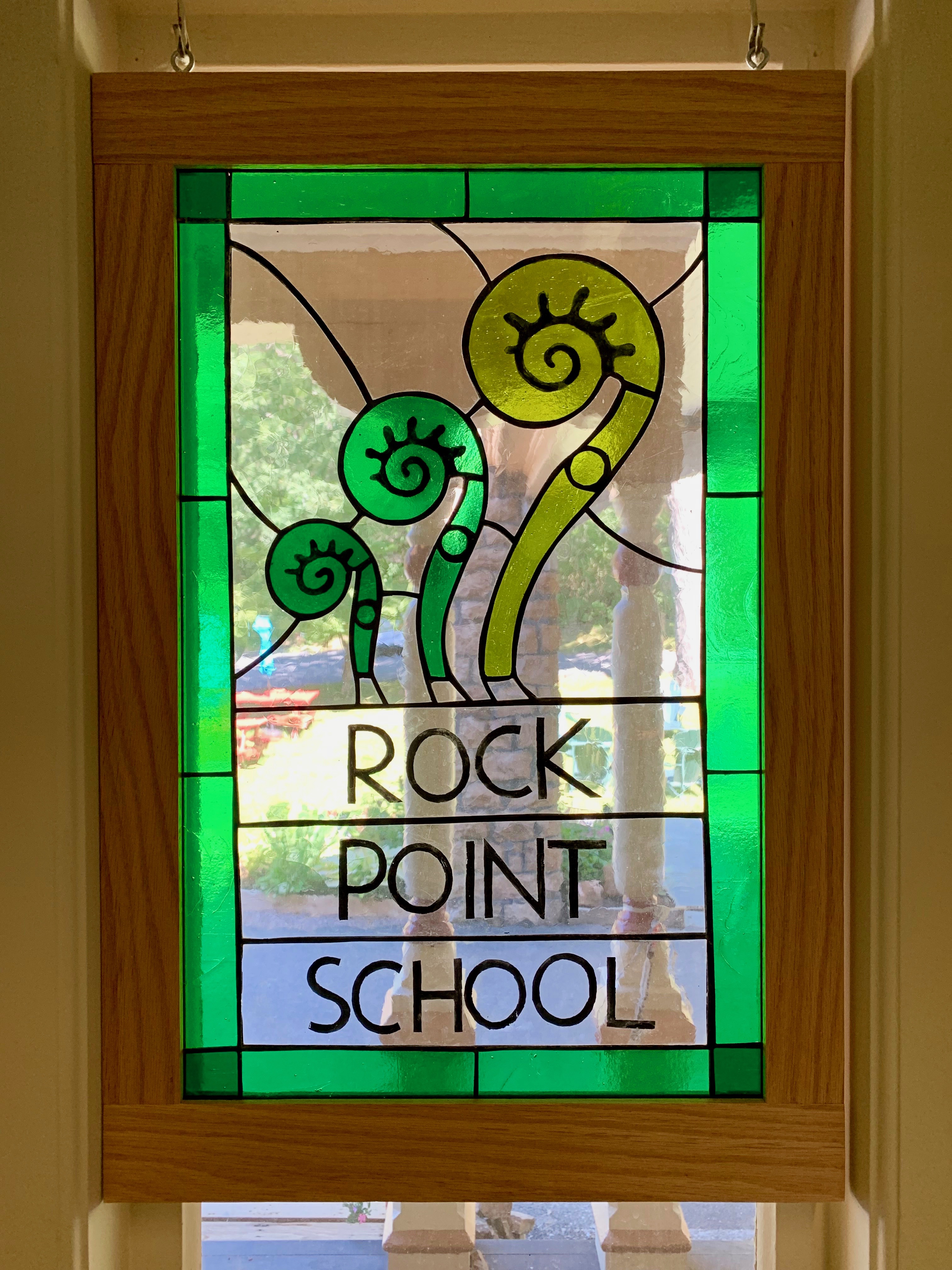 on September 5, 2019 By Molly Huddle Coffey | News Feed Open & Inclusive
You may have noticed our mission statement has changed! After consulting our students, staff, families of students, and board members, we felt it was time to update the language in the mission statement which has been central to our school for decades. While the mission of the school remains the same and continues to be the "north star" for what we do here, we know that the language we use matters.
Read - Same Mission, New Language 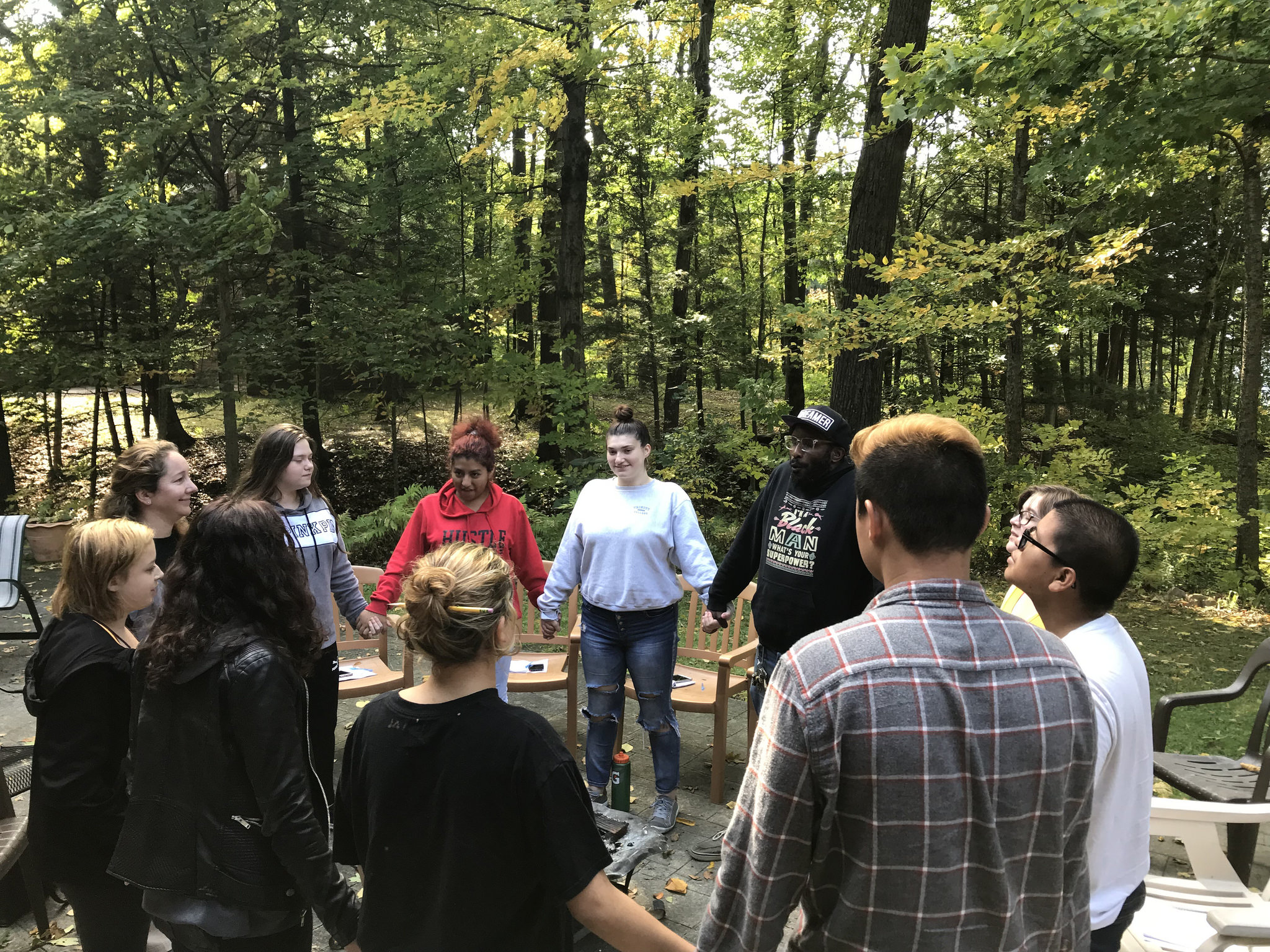 on October 16, 2018 By Molly Huddle Coffey | Open & Inclusive high school
For the second year, students participated in a day of poetry called "Share Your Heart, Share the World" with the Sundog Poetry Center. This year, the event featured Vermont Poet Laureate, Chard deNiord. Currently, deNiord is a professor at Providence College and lives in Westminster, VT. He is the recipient of the Pushcart Prize (1998) and was included in Best American Poetry (1999).
Read - Share your Heart, Share the World 2018

on December 15, 2017 By Molly Huddle Coffey | Motivation Open & Inclusive high school
After the "Share Your Heart, Share Your World" poetry workshop run by Sundog Poetry this fall, our English teacher, Abbey Baker was inspired to incorporate more poetry writing into the school year. The idea of having professional poets come to the school for workshops was appealing to the students as well. So far, two poets, Lizzy Fox (left) and Ellen Bethea (right, with RPS student), have given workshops and we are hoping to host two more before the end of the school year.
Read - Express Yourself: Visiting Poet Series 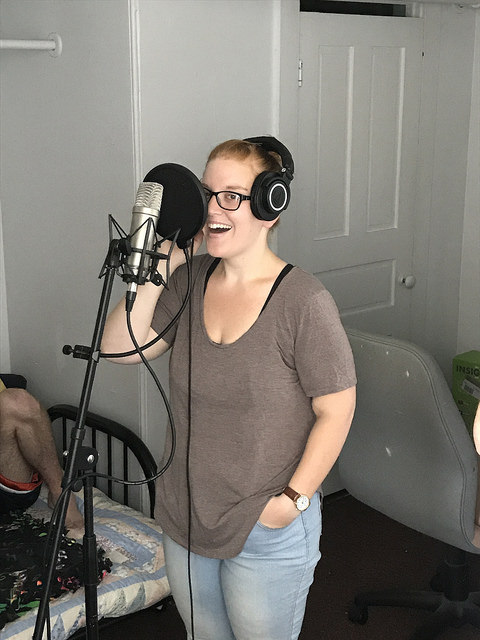 on November 27, 2017 By Molly Huddle Coffey | Open & Inclusive
Our amazing residential educator, Kelly Ainsworth, wrote a song about her time at Rock Point and performed it for us at graduation in June. Kelly recently moved to New Jersey to be with her fiancé and is now working at a preschool. We miss her contagious smile and generous spirit. The song captures so much of what is special about our school and we are so grateful to Kelly for sharing it with us!
Read - I'll Call You (Home) 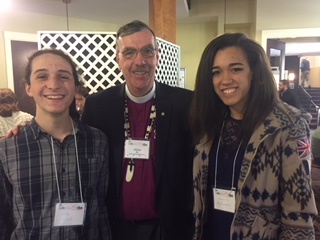 on November 7, 2017 By Molly Huddle Coffey | Open & Inclusive
The theme for the 185th Diocesan Convention of the Episcopal Church in Vermont was "Declare Dignity," with special guest, Dr. Donna Hicks, renowned author of Dignity: The Essential Role It Plays in Resolving Conflict. As our country is suffering such deep divisions, the Episcopal Church in Vermont wants to bring people together. Hicks' theory is that by treating one another with dignity, even in the midst of conflict, we can become more connected to one another and create meaningful relationships that allow us to resolve our conflicts without sacrificing our sense of self.
Read - Declare Dignity: Diocesan Convention 2017

on May 26, 2017 By Molly Huddle Coffey | Open & Inclusive high school
Flowers, dresses, canoes, and cupcakes made this year's "Secret Garden" themed Prom another one to remember. Staff showed up in floral outfits, while the Prom committee students decorated the library with fairy lights, lilacs, and a chocolate fountain. Per Rock Point tradition, guidance counselor, Emily, was mixing up smoothies and milkshakes for students, while history teacher, Gus, gave everyone rides in his canoe themed "lame-o."
Read - Dancing the Night Away: Prom 2017 The Magic of Gift Giving

on December 22, 2016 By Molly Huddle Coffey | Open & Inclusive
One of the sweetest traditions we have this time of year is the tradition of exchanging gifts. In our community, we participate in a Secret Santa exchange. Every staff member, every student, and some members of our extended community draws a name before November break, giving them a month to plot and plan what they will do for their gift recipient. The magic of this is that it brings our community together. People often draw the name of someone they may not be close to, but in our tradition, they secretly investigate what their recipient may like. Many students make personal gifts for their Secret Santa in their art class or in their spare time.  The care and kindness that is on display when gifts are exchanged are a testament to the thoughtful nature of our community.
Read - The Magic of Gift Giving

on November 14, 2016 By Molly Huddle Coffey | Open & Inclusive
We were so excited to take part in the 2016 Convention for the Episcopal Diocese of Vermont. This year's theme, Love Heals, had leaders of the Church exploring how they can take an even more active role in championing women, children, and vulnerable populations. The Diocese generously gave us time to speak to the Convention about the work we do at Rock Point School. Ross, a junior at Rock Point, shared his personal story and spoke about what Rock Point has done for him. Last spring, Ross was struggling at home and he and his parents found Rock Point School. Ross says he likes the "social dynamic" at Rock Point, where "you can be free to express yourself and not get harsh criticism from peers or staff." He also really appreciates the teachers, who are willing to spend extra time with him, and the dorm staff who "are always positive and ready to do any activity." Ross is a fabulous representative of the school and we are so proud of him for being brave enough to share his story in front of hundreds of people!
Read - Love Heals: Diocesan Convention 2016
Previous All posts Next