Running in the Time of Coronavirus

C.J., Jeanine, and Alyssa getting in their miles around Vermont

During a typical year in Burlington, the last Sunday in May is reserved for the Vermont City Marathon. It’s one of the city’s largest events, drawing thousands of people for 26.2 miles of celebration. The marathon is known for its joyous, inclusive atmosphere. You can run the whole thing, run half as a relay pair, or run a leg on relay teams of up to five people. This flexibility means the marathon is filled with dedicated die-hards and weekend warriors alike. You’ll see Boston hopefuls and young kiddos all on the same course, and this community atmosphere brings everyone—from runners to spectators—together for a whole lot of fun and camaraderie. 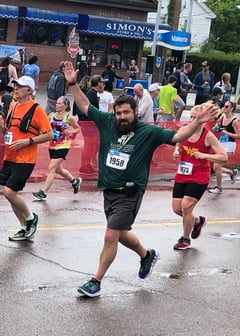 Rock Point always has a few staff and students run some or all of the marathon, with much of the RPS community cheering on the masses that take over North Ave. This year, Collin (Head Residential Educator, pictured in the 2019 Marathon) was set to run the whole course, while fellow members of the Residential team, Alyssa and Jeanine signed up to split the race. In Admissions, Hillary was set to run on a five-person relay team. While marathon Sunday will come and go in Burlington without a formal race, most races across the U.S. have just been postponed. Runners can wait to race in the fall, complete races virtually using platforms like Strava, or defer their entry until next spring.

Regardless of races, runners will always find a way to keep on running. Around the world, quarantine has forced everyone to get creative when it comes to exercise. March and April were filled with news stories of people running marathons in their backyard,  on treadmills in their basement, or in loops around their neighborhood.

With few places to go, some people have found more time than ever to get outside. Hillary commented on how her running has changed, saying, “Since I don’t have to commute 30 minutes each way, I have more time to run. It helps me get away from the computer screen, gives me a break from checking the news, and helps me get centered before getting back to work.” The nature of my running has changed too. With extra time at home, I have taken to mapping out large loops. These types of routes are satisfying to complete physically and visually, and I can spend hours methodically jogging along miles of Vermont’s rolling hills with just a few cows and the occasional cyclist as companions.

For now, the Burlington Marathon has been rescheduled for October 25th. Until then, runners will just keep running the best they know how—along the Burlington bike path, through Vermont’s winding back roads, and just about everywhere in-between.