We Laughed, We Cried, We Cheered: Play Performance 2017 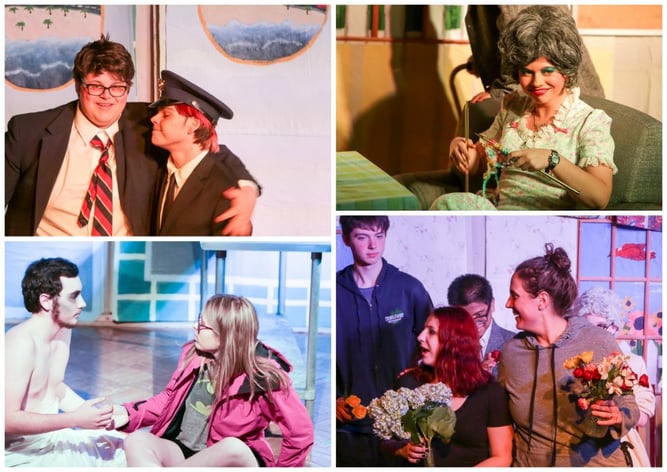 The culmination of our Project Based Learning focus was a series of four plays performed on February 23rd. The plays were written, performed, directed, and produced by students. Our students conceived of everything from the make-up to the lighting to the music during scene changes and we are so proud of all of their hard work.

The four plays were as follows:

"Take-Off" by Jesse Ruigomez (grade 10) - in this comedic play a morally dubious billionaire gets his comeuppance with an unexpected twist at the end.

"Second Chances" by A.J. Jackson (grade 12) - a couple is able to resolve their complicated issues and come to terms with mortality.

"The Towers" by Josh Santora (grade 10) - this play is a window into conversations in an office breakroom on the morning of September 11, 2001.

"Kids These Days" by Allison Zindle (grade 11) - a comedy, set in a nursing home, where the residents have a little fun with their reluctant teenage volunteer.

This year's performance was dedicated to former English teacher and founder of the Rock Point drama program, Marylen Grigas, who passed away in mid-February. Her creative vision and love for Rock Point and its students was an inspiration and a guiding force for all of us.

For more pictures of the performance, see our Flickr album! Videos of the plays will be posted as soon as we finish editing.