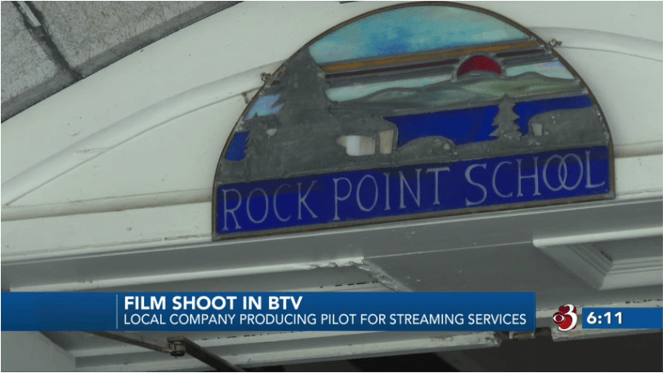 Anyone that's visited or been to Rock Point School can tell you that the beauty of summer in Burlington is captured perfectly on the school's campus. A local film crew seems to agree! Rock Point School and a few other Burlington locations, were the setting of a pilot episode for a new TV series. The series centers around students at a fictional all-girls boarding school, which made RPS an ideal setting.

"Local film crew films new pilot episode in Burlington" was the lead on CBS-affiliate WCAX-TV Channel 3 News on August 17th. The interior and exterior of Rock Point School's iconic stone  building were featured prominently in the news segment as were the surrounding campus grounds. You can read more about the series, tentatively titled "Zodiac" in the Burlington Free Press.

The local director, Jac Skyyler said it best "Rock Point School was really excited about being involved in and helping". We love any chance to share our unique campus with others.

To the right is a behind the scenes shot with our Head of School, C.J. Spirito, and one of the stars of the series, Corbin Bernsen!